Showing posts from January, 2001
Show all

A walk down Kao San Road 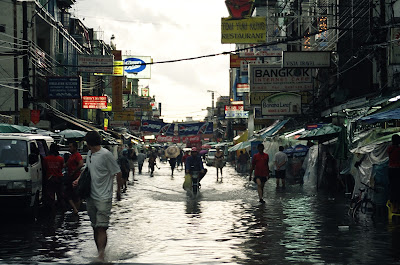 Bangkok | Thailand
Woah baby! Bangkok is not just a different place; it's a different world. The second the warm humid air covers your body you have no choice but to slow down. Sandals are mandatory and everyone swings their legs with every step. It's like walking around in a big warm bath.

At night we walk down Kao San Road looking at everyone as we're being watched. This is where everyone comes on the way to somewhere else. We browse the stalls looking at a million things I don't need and stop every once in a while to drink beer or Thai whiskey at one of the rocky tables in the road.

The travelers are dirty, the music loud and the Tuk Tuks spew greasy exhaust into your beer. Somehow it’s wonderful. Like being a part of something growing or evolving. I'd say that anything could happen here, but it probably already has.

It's way past midnight and a tiny girl, no more than eight years old, interrupts our game of rock paper scissors to try a few han…
Read more

A rooftop gathering of fellow refugees

January 11, 2001
Taipei | Taiwan
(Hwa Bao - Red Envelope)
Shin Nian Kwai Lur! - Happy New Year!Don't worry, try as you might, you will pronounce it wrong. But go ahead and surprise your friends and co-workers with your expanding knowledge of the Mandarin language.

In case you were worrying - English doesn't translate to Chinese for similar reasons. The first being that their language just doesn't have some of the sounds we use. The second, and most important reason, is because their written language is composed of thousands of words rather than a phonetic alphabet.

If you're a big fan of golf in Taiwan you would be very familiar with "Lao Hwa Wu Dz". In Chinese that sounds very similar to Tiger Woods. And just as important as the sound, it translates to "Tiger Five Pieces". Kinda neat huh!

As long as I can remember, December 31st is perhaps one of the biggest party nights of the year. But here in Taiwan it was just December 31st - the day before January first. The…
Read more
More posts